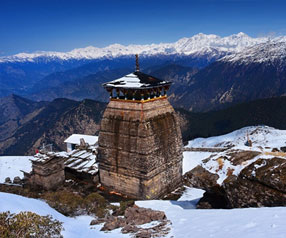 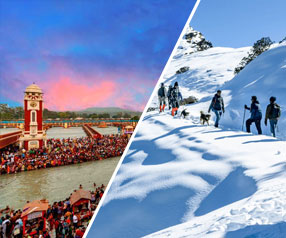 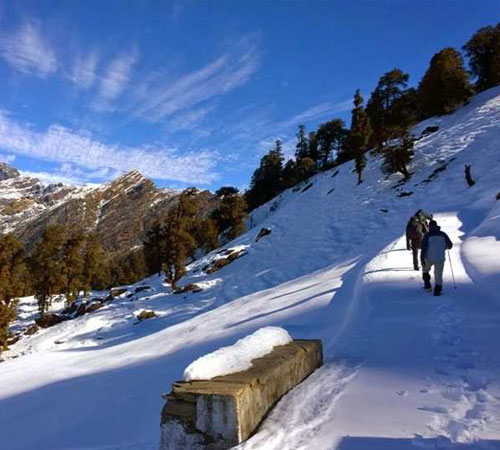 Chopta
Chopta is a hill station situated amidst the mountains of Uttarakhand at an altitude of 2600 meters. It is also known as the "Mini Switzerland of Uttarakhand", which is still unknown to travellers that lie 29 km from Ukhimath and 162kms from Rishikesh on the road from Gopeshwar to Guptkashi. Chopta is a tiny region of ​​plains and evergreen forest area, which is a basis of Kedarnath Wildlife Sanctuary located in Uttarakhand state, India, and a base for Tungnath, the third temple of Panch Kedar, which is 3.5 kilometres (2.2 mi) away.

The whole area is a centre of beauty, especially for those who are looking for a suitable place to relax without the hustle and bustle of a tourist destination. The valley is partially located in Uttarakhand, in which Chopta village is located. Home to a variety of rare birds, flowers and alpine flora, the Chopta Valley is a mountain lover's paradise.

Auli Auli is a Himalayan ski resort and hill station in the north Indian state of Uttarakhand, a new entry in India's tourism map. It is surrounded by coniferous and oak forests, as well as the Nanda Devi and Male Parbat mountains. Auli, spotted with apple orchards, old oak and cedar trees, lacks in natural beauty. Many religious sites are also scattered around Auli. It is believed that Shankaracharya blessed Auli with his journey.

Skiing at Auli offers beautiful views of the peaks like Mount Nandadevi Kamet, Mana Parvat, Dunagiri, Betharatoli, Neelkanth, Elephant Parbat, Ghori Parbat and Male Parat. Skiing at Auli in the Gorson Reserve Forest (part of the Nanda Devi National Park) is a habit of some of the widely rare Himalayan wildlife. These accommodate snow leopards, musk deer, wild boar, wild cat, wild rabbit, jackal, fox, hyena and bear. In the hotbed of snow-capped mountains, Auli is one of the quiet few places in India, where skiing is a prominent pastime.

Joshimath Joshimath, also known as Jyotirmath, is a sacred place in the state of Uttarakhand. It is the winter seat of Lord Badri and is highly revered because Adi Shankaracharya established one of the four monasteries here in the 8th century. The city of Joshimath is also the pivot of activities such as mountain climbing, trekking, and other exciting events for those who like the pumping of adrenaline.

It is the gateway to multiple Himalayan mountain climbing pilgrimages, trekking trails and pilgrimage centres like Badrinath. It is one of the four cardinal fathers established by Adi Shankara. The ancient Basdev temple at Joshimath is attributed to Vasu Dev. The city has many temples, one of them dedicated to Narasimha and Gaurishankar, which attracts millions of devotees here. The city establishes itself as one of the most important cities of Uttarakhand for pilgrims. Thus, temples are the prominent places to visit in Joshimath.